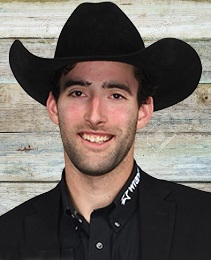 With every season, Josh keeps improving. 2021 saw him place a career best 17th in the World Standings, with a tenth place run at the Battle of the Rockies and fifth place run at the North American Chuckwagon Championship in Lloydminster being his best of the season. Josh was the WPCA Top Rookie Driver in 2018, and in In 2019 Josh received the Herman Flad Memorial Award symbolic of the WPCA’s Most Improved Driver and was the recipient of the Kenn Borek Memorial Award for most sportsmanlike driver at the Battle of the North.

Josh was introduced to chuckwagon racing by the Bensmiller family and started working as a barn hand for Chance Bensmiller in the WPCA in 2008. In 2013 he started outriding for Chance Bensmiller after Bensmiller moved over to the CPCA circuit. Josh works as a lineman in the off season and enjoys hockey and baseball. Josh has a daughter Brooklynn, and along with his fiancée Alissa, make their home in Dewberry, Alberta.