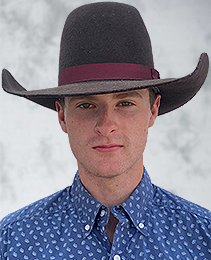 As part of a talented group of rookie outriders on the 2021 WPCA Pro Tour, Jaron mads his debut ride behind Darcy Flad at Dewberry on the 2020 Rez Tour, and made his professional debut behind Tuff Dreger at the Battle of the Foothills in High River in 2021. In addition to his steady ride behind Tuff Dreger, Jaron picked up additional rides with Roy Romannow and Dayton Sutherland, and finished a very respectable 19th in the World Standings in his first year.

Jaron got the bug for chuckwagon racing after helping Layne MacGillivray as a barn hand when he was 12 years old. He continued to help MacGillivray for a few years at the northern shows prior to hooking up with Darcy Flad during the 2019 season. He credits Layne MacGillivray as being the most influential over his outriding career up to this point.