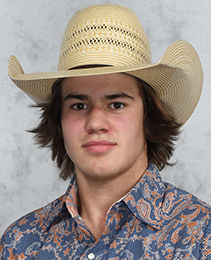 Hayden made history in 2021 when, in just his second year outriding, became the youngest ever World Champion Outrider at just 17 years old. He also won the first two show championships of his career at the Bonnyville Chuckwagon Championship with Kurt Bensmiller, and the Battle of the North with his father Obrey Motowylo. He was the highest pointed outrider at the Battle of the Foothills, Strathmore Stampede, and the Bonnyville Chuckwagon Championship, and the WPCA's Top Rookie Outrider in 2019.

Hayden credits his older brother Ethan as being the most helpful and influential over his outriding career so far. A former wild pony racer, Hayden's off-season hobbies include many sports, most notably hockey, basketball, and team roping. He was a member of the Rimby Renegades who won the Alberta Provincial Hockey Championship in 2017. Hayden is the son of driver Obrey Motowylo and the younger brother of fellow outrider Ethan Motowylo. A high school student, Hayden is single, and makes his home in Blufton, Alberta.