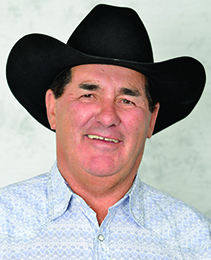 2020 will be a bittersweet year for Gary as it not only marks 50 years since he drove his first race in Big River, Saskatchewan in 1970, but it will also be his last season as a professional chuckwagon driver.

Gary posted 18 top ten runs in 2019, including 2 first place runs and 5 runs that also placed inside the top five. A third-place overall finish place overall finish at the season ending Century Downs "WINNERS' ZONE" World Finals was his best of the season. Gary was runner-up for the World Chuckwagon Championship in 2016, has won 3 WPCA show championships, and has twice qualified for GMC Rangeland Derby championship final heat. He has had 7 horses named to the WPCA Pro Tour and the Calgary Stampede Equine Outfits Of Excellence.

Prior to joining the WPCA, Gary had an extremely successful career on the Canadian Professional Chuckwagon Association (CPCA) circuit where he was the 2010 CPCA Champion driver, was the CPCA’s High Point Driver three times in four years, and won 13 CPCA show championships in a 5 year stretch. Gary won the CPCA’s Bruce Bremner Award for the Most Consistent Barreling Outfit in 2010, received the CPCA's Chuckwagon Family of the Year Award in 2005, and qualified for the winner–take–all final for the CPCA Championship in six consecutive years, finishing no worse than 3rd overall in the same time period.

Gary is a 2nd generation wagon man whose father Art Gorst competed at the Stampede in the late 1970’s and early 1980’s. Gary and his wife Janice have three children - fellow drivers Logan and Dustin Gorst, and daughter Jenalee, and make their home in Meadow Lake, Saskatchewan.