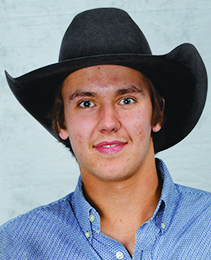 Ethan is a two time recipient of the Rod Glass Memorial Award symbolic of the WPCA’s Most Improved Outrider, and was the WPCA Top Rookie Outrider in 2016 – the same year he made his first official ride behind his father Obrey Motowylo at the Grande Prairie Stompede.

Ethan credits 5-time World Champion outrider Chanse Vigen as being the most helpful and influential over his budding career so far. A former wild pony racer, Ethan's off-season hobbies include hockey, basketball, and team roping. Ethan is the son of chuckwagon driver Obrey Motowylo and older brother to fellow outrider Hayden Motowylo. A high school student, Ethan is single, and makes his home in Blufton, Alberta.