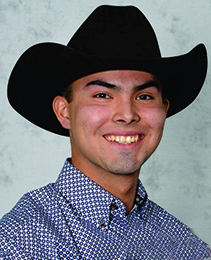 There was no sophomore jinx for Dean in 2018 as he had a much improved season placing 10th overall in the World Standings. He rode all season for Kelly and Curtis Morin, while picking up additional mounts at times for the likes of Logan Gorst, Mike Vigen, Chad Harden, Roger Moore and Codey McCurrach.  Dean started his outriding career in 2015 for his Uncle Kelly Morin at the Colonial Days Fair in Lloydminster. He completed his first full season in 2016 on the CPCA circuit and was named the CPCA's High Point Rookie Outrider. Dean is a third-generation wagon man whose uncles are current WPCA drivers Curtis and Kelly Morin and his grandfather Bruce Morin drove chuckwagons on the CPCA Circuit and at the Calgary Stampede for many years. Dean enjoys hockey, riding horses, soccer and working out. Dean is single and makes his home in Debden, Saskatchewan.