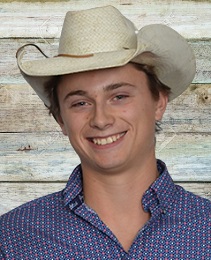 A third generation chuckwagon competitor, Dayton is the grandson of chuckwagon legend Kelly Sutherland and the son of fellow driver Mark Sutherland. 2021 saw Dayton post 7 top ten runs, including 3 runs that cracked the top five. A 6th overall placing at the Battle of the Foothills, where he made the semi final round was his best of the year. In 2019 Dayton split his time between the Western Chuckwagon Association circuit and the WPCA Pro Tour, winning the Dawson Creek Exhibition on the WCA and successfully defending his title at the Battle of the Rockies. Dayton was a late addition to the 2016 WPCA Pro Tour and made his debut as a professional chuckwagon driver at the Battle of the North in Dawson Creek, giving the Sutherland family a rare and unique distinction of having three generations of drivers competing in the same race meet.

Dayton was named the WPCA’s Top Rookie Driver in 2017, and was the recipient of the the Rod Glass Memorial Award for Most Improved Outrider in 2016.

He enjoys playing hockey, loves music, and anything with wheels such as quads and dirt bikes. Dayton is single and makes his home in DeWinton, Alberta.