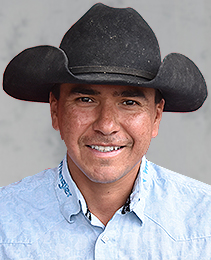 A role model for many First Nation Youths, Curtis competed at the Calgary Stampede GMC Rangeland Derby for the first time as a chuckwagon driver in 2019, and a fifth place run at the Century Downs World Finals were the highlights of his 2019 season.

Curtis began his career on the Canadian Professional Chuckwagon Association (CPCA) circuit as an outrider in 1991 before moving up into the box as a driver in 2012. He won his first show championship at the Oil & AG Turtleford Derby in 2014, was named the CPCA’s CPCA Most improved Driver in 2013, and qualified for his first career championship final heat at the Wainwright Stampede. He joined the WPCA Pro Tour in 2016, and in 2018 Curtis was selected to drive the Calgary Stampede’s demonstration race – “Chuckwagon 101” – at the GMC Rangeland Derby.