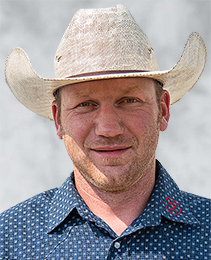 With just a couple of seasons under his belt, Colin has shown that he he has the makings of a champion. He started his career on the Western Chuckwagon Association (WCA) Circuit in 2019, and in just his third show as a chuckwagon driver, he won the Rio Grande Rodeo. He was the aggregate winner later that year at the WCA finals at the Dawson Creek Fall Fair en route to being named the WCA’s Top Rookie Driver for 2019. He made his debut with the WPCA at the Battle of the Foothills in 2021.

Colin began his career helping fellow driver Chanse Vigen, and ultimately made the move into the wagon box himself as a driver. He credits chuckwagon drivers Chanse Vigen, Rick Fraser and Mike Vigen for being the most influential over his career.

Colin enjoys hockey, hunting, coaching his kids hockey teams, and spending time with his  wife and family in the off season. He played senior hockey for the Spirit River Rangers who won 2 Provincial and 8 NPHL Championships, and works as the Business Development Manager for PureChem Services out of Grande Prairie, Alberta in the off season. Colin has three children – Eastyn, Daylen and Duke. He and his wife Deri make their home in Hythe, Alberta.