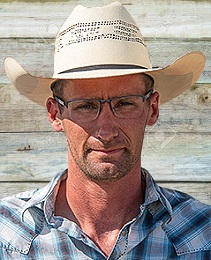 A veteran driver with over 25 years of experience driving horses, Chance made his debut run on the 2021 WPCA Pro Tour at the Dewberry World Chuckwagon Races, and turned a lot of heads by not only winning his heat, but placing 7th on the day and 6th overall in the aggregate standings. He finished the 2021 season with 9 top ten runs, including 3 runs that placed inside the top five, en route to being the 2021 WPCA Top Rookie Driver.

Chance is a 4th generation driver whose great-grandfather Jack Coates drove chuckwagons throughout the 1950's at the Calgary Stampede and was one of the earliest Canadian chuckwagon drivers to compete at the Cheyenne Frontier Days. His wife Amanda is an accomplished pony chuckwagon and chariot driver as well.

Prior to driving big wagons, Chance drove pony chuckwagons and pony chariots for nearly 17 years and won several show championships, highlighted by wins in Sundre, Drumheller, and five consecutive years at Buck Lake. He was an accomplished curler, reaching the Alberta Junior Provincial Championships as a skip, and even played third for hall-of-fame curler Kevin Martin in the occasional bonspiel.

Chance is a farmer and a rancher, and works as a field operator for Cenovus Energy in the off season and enjoys hunting and curling. Chance has 3 children - Khloe, Colby and Layne and along with his wife Amanda make their home in Buck Creek, Alberta.