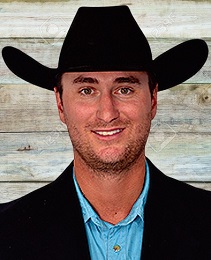 As a chuckwagon driver, Chad was the was the recipient of the 2016 Herman Flad Memorial Award as the WPCA’s Most Improved Driver, won the Orville Strandquist Memorial Award for Top Rookie Driver at the 2015 Calgary Stampede, and was the WPCA Top Rookie Driver in 2013. He qualified for the Rangeland Derby’s “Semi Final Saturday” in 2019. Chad made his debut as a chuckwagon driver in 2012 in Grande Prairie on the Western Chuckwagon Association (WCA) circuit in 2012 and qualified for the championship final heat. At the WCA’s final show of the 2012 season in Dawson Creek, Chad again qualified for the championship final heat.

Chad is a 4th generation chuckwagon competitor, whose great-grandfather Wilbur David and grandfather Ron David are former drivers, he is the younger brother to fellow driver Jordie Fike, and his mother Dona is a former WPCA chuckwagon judge. Chad and his wife Catlin have two children - Racin and Ryden - and make their home in Cremona, Alberta in the off season. Chad runs the hockey rink in Cremona and enjoys dirt biking, basketball, & golfing.