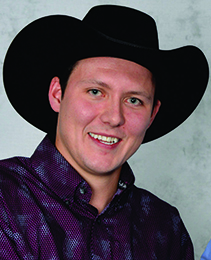 Casey was the World Champion Outrider in 2017, and received the Rod Glass Memorial Award symbolic of the WPCA’s Most Improved Outrider in 2014. Casey started his career on the Canadian Professional Chuckwagon Association (CPCA) circuit in 2010 and was named the CPCA High Point Rookie Outrider. Just two years later he was runner-up to the CPCA outrider championship in 2012.

Casey is a 2nd generation wagonman whose father is current driver Ross Knight, his uncle is driver Jim Knight, and he is a cousin to driver Wayne Knight.

A two-sport athlete, Casey received a hockey scholarship to play for the University of Toronto Varsity Blues. Prior to playing university hockey, Casey played hockey in the Alberta Junior Hockey League with the Lloydminster Bobcats and the Spruce Grove Saints. He has traveled to New Zealand, and lists hockey, traveling, reading and socializing with people among his interests. Casey has a girlfriend Courtnie, and makes his home in St. Walburg, Saskatchewan.