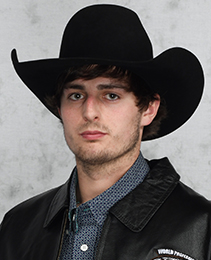 2021 was another great season for Brendan,  as won 3 show championships at the Strathmore Stampede with Chance Bensmiller, and the Battle of the Rockies and the Ponoka Stampede Wild West Chuckwagon Championship with his father Vern Nolin. His 5th place overall finish in the World Standings tied his career best.

Brendan started his career on the Canadian Professional Chuckwagon Association (CPCA) circuit in the middle of the 2014 season making his debut ride behind his father Vern Nolin at his hometown show in Dewberry Alberta. Brendan got into the chuckwagon business through his father Vern, as well through the encouragement of his uncle Mick Nolin – 3-time CPCA Champion Outrider. In addition to his father Vern, Brendan credits driver Bob Van Eaton for giving him a chance to outride for him as well.

Brendan is a graduate of the Oklahoma State Horseshoeing School, and works as a Farrier and a home builder. He enjoys hockey, hunting and fishing, and plays Senior Hockey for the Dewberry Mustangs in the off season. Brendan is single and make his home in Dewberry, Alberta.