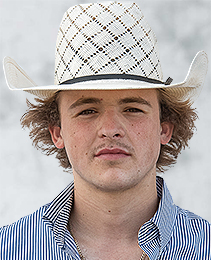 A fourth generation chuckwagon competitor, Branson is the nephew of former Calgary Stampede Champion Chad Harden and the great-grandson of Leroy Harden and grandson of Robert Harden who both drove wagons for many years. Branson made his debut ride behind his uncle Chad Harden at the Strathmore Stampede in 2021, and outrode for Troy Flad the last half of the season as well.

Branson credits his uncle Chad Harden, father Brent Harden and driver Troy Flad for being the most influential over his outriding career so far. A farmer and rancher in the off season, Branson also enjoys hockey and plays Junior "B" for the Wetaskiwin Icemen of the CJHL. He is single and makes his home in Mulhurst Bay, Alberta.