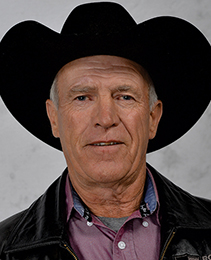 A veteran driver with nearly 30 years experience, Bob had a successful return to the WPCA Pro Tour in 2018. He posted 4 top ten runs with a pair of fourth place runs at the Grande Prairie Stompede and Battle of the Rockies being his best of the year. In addition to racing with the WPCA, Bob spent some time on the Canadian Professional Chuckwagon Association (CPCA) circuit where he was a two-time winner of the CPCA’s Safe drive award and was named the CPCA’s Most Improved Driver in 2016. Bob ran pacers for ten years before starting out on the Central Chuckwagon Association in 1992 as a chuckwagon driver as well as an outrider, eventually making the move to the WPCA Pro Tour in 2004. He won the Olds Fair & Rodeo while competing on the WPCA’s Second Circuit in 1996. A second generation chuckwagon driver, Bob's father Don Van Eaton drove chuckwagons at the Calgary Stampede between 1961 and 1973. An oilfield worker in the off season, Bob is the father of five children - Bobbi Jo, Coralynn, Franklin, Jaclynn, Jesse - and seven grandchildren. Bob and his fiancée Crystal makes their home in Lacombe, Alberta.