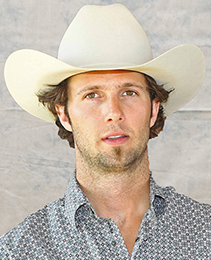 After spending the first nine years of his career on the Canadian Professional Chuckwagon Association (CPCA) circuit, Aric has decided to move to the WPCA Pro Tour for his tenth year in 2020. On the CPCA circuit in 2019, Aric won two shows at the  CPCA Spirit of Bonnyville Chuckwagon Races outriding for Brad McMann and at the Oil & AG Turtleford Derby outriding for Kris Molle. He finished out the 2019 season by  riding at his first WPCA show at the Century Downs World Finals for Vern Nolin.

Aric started his career by attending Dustin Gorst's outridng school and made his career ride in 2011 behind Kris Molle in North Battleford, Saskatchewan. By season's end, he was named the CPCA's Top Rookie Outrider.

Aric runs a big farming operation, is a graduate of the the Southern Alberta Institute of Technology (SAIT) with a diploma in Mechanical Engineering Technology, and works as production technologist at Husky Energy. Aric's off-season activities include hockey and snowmobiling. Aric and his wife Ashley have 3 children – Dekker, Bryken and Keslee - and make their home in Chauvin, Alberta.